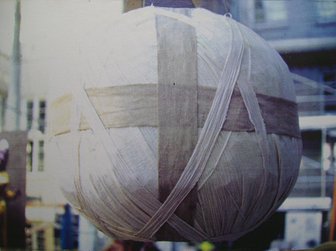 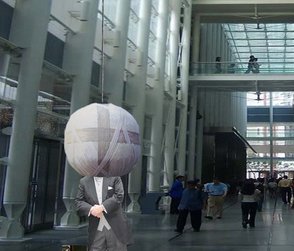 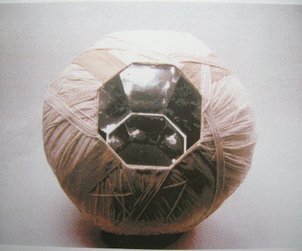 'ALT2000' is a kaleidoscopic, time mirror sphere, establishing an abstract and physical manifestation of What is TIME.

'ALT2000' is a geometrical object, a container containing time, and the container is a temporal model, visualizing what time is in itself when time is designed as a physical object: The now moving in time, independent of the moment, yet being in the moment.

Both the time flowing through time and time represented, through external gauze lashed embalming of the object's form. The object is a physical representation of time, as a process in which time is temporarily halted for a period. The embalming technique refers to a particular historical period where the Egyptians tried to conserve the human body to remain forever. While the object's shape in itself does not refer to the same time, it provides the object with displaced time meanings contained in itself.

The container hangs suspended on a wire, in space at a height that allows the viewer physically to look inside the container. When the viewer enters the container, the person is inside time. Hence the time-object becomes interactive.

Inside, the container is covered with mirrors, which reflects ’many times.’ Human is in the `violence` of time, and perceive time as a pressure, therefore the experience inside the container becomes claustrophobic and self-referential.

There is only one now (as Eckhardt Tolle and other spiritual teachers state), within time. The now is moving in time, independent of the moment. A tape is placed inside 'ALT2000'. It is looping ’forever`, (my voice), reciting: 'nownownownownownownownow…...........'

The globe-shaped container is open at its bottom and top. Its time is un-stagnated in its free-floating placement and openness. A perpetual state of itself, while the sequences of events that are inside, in time (present, space, sound), are variable and flowing through. Streaming like the river Kronos, symbolizing time.

The container is incomprehensible, like the concept of time, but the materials and form-language it consists of, are set together so they give the audience an experience beyond time and space. The exhibition space is transformed into a scene, a multi-mirroring scenographic space where the container is subject to the spectator attendance. The, almost architectural, container invites the audience into its room, as a performance that takes place in a physical space.

Regarding the time reflections, I took a starting point inspired by 'The mirror stage'; a concept outlined in 1936 in the psychoanalytic theory of Jacques Lacan. 'ALT2000' is furthermore referring to Niels Bohr's interpretation of quantum mechanics, a reality stating that we can only see the world when it’s measured, and therefore not as nature in itself. In other words, one is looking at the watch and observes it is 8 pm. Even when one is not looking at the watch, it’s still 8 pm. In that sense, a watch becomes our time measurement. But accordingly quantum mechanics, apart from Bohr's ideas, this is not correct as the arrow is not at 8 pm until one is looking at the watch. Until one looks at the watch, time can be all over at the same time, at the atom level.

Quantum theory stated that there is an immanent instability in the world. String theory describes particles swinging on a string in a multi-dimensional space, where humans can only grasp 3D. But theoretically, time could be projections of a much more complex and multidimensional world. The theory of relativity tells that the passing of time isn’t constant, rather, it changes during movement and that energy is a kind of mass, and that gravity can be perceived as a geometrical phenomenon.