'Mani_Fest' is a shared experience, in which we collaborate on a mutual painting with the focus on nonverbal, non-violent interaction. It is an exercise in letting go of Ego control, with one artist extremely focused and close-up to the canvas in a meditative state of 'flow', doing brush strokes in slow motion, while she is painting over the others art. The other's on action painting, as when he is working in the streets, doing graffiti art. So we make use of two opposite tempi.

It´s a live experiment between two artists' individual minds, and about the dynamic between us. How we spontaneously and uncensored react to the actions of each other. 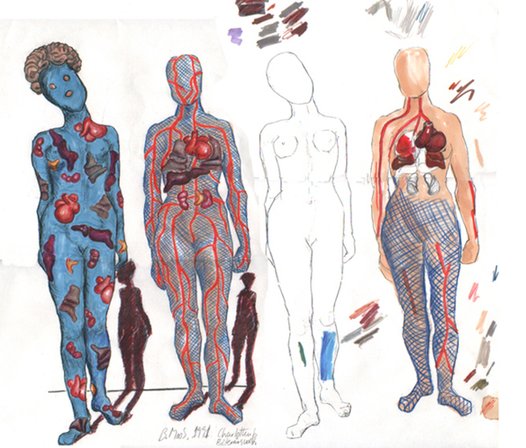 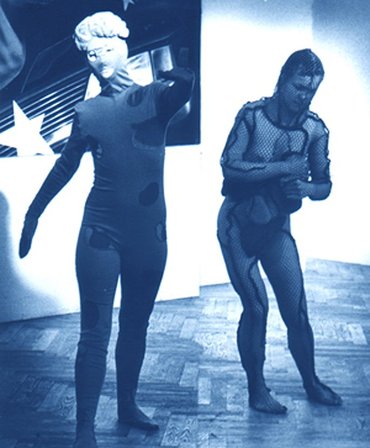 'Corpus in C' is a human, paradoxical, and 'open' live performance that takes its starting point in the female body, examining and investigating the limits of what the female body is, and what it means to be in a woman's body in relation to scientific and gender-specific themes.

The performance involves interaction with other artists exhibited works at the exhibition, architecture, the audience's response to the performers, intersecting several artistic disciplines such as Visual Arts, dance, and theater.

'Corpus in C' implements through its interdisciplinary nature Richard Wagner's idea of ’a total work of art,’ and the performance is choreographed so that frozen movements are performed in a sequence reminiscent of a staged march, in which the performers occasionally stop their movements in order to pose in stylized tableaux that refers to Bertolt Brecht's instructional methods.

Butoh dance movements is another element in this performance. Butoh was born out of post-war Japan as a movement in search of a new identity that could recreate sense within a defeated society. Butoh rebelled against traditional dance forms, inspired by Antonin Artaud's Theatre of Cruelty, and examines the primordial.

The costumes inserted klichées; total cats suits with external misplaced organs, blood vessels, and over-sized brains, indicates artistic commentary about a plausible apocalyptic future, a scenario in which genetic manipulation might lead to deformities, and alienation from mortal bodies as we know them now. I use the term `Synthetic Realism`to describe this artistic expression.

The performers ’robotic’ movements imprints an image of mankind’s development of civilization and (mis)use of technology. It is a commentary on fascism that entailed a self-defeating choreography, where the female body is looking for its identity.

It seems as if the performer has lost herself, either by ’admitting’ that old norms are impossible to break free of or by rejecting female attributes and femininity.

'Corpus in C’ juxtaposes clichés and attains thereby a 'saturation' which is so thick that the audience might understand that it's all about women's pain caused by a clash between 'the truth by breathing’ and the vibrant body encased in degenerated organ costume-shells, which are very difficult to break through and get out of.

The aesthetic symbolism points to the relationship between physical and mental presence in time and space, with the hope to exceed these and create a deeper and freer space inhabited with an awareness of how scientific new inventions both can lead astray and create awareness of identity.