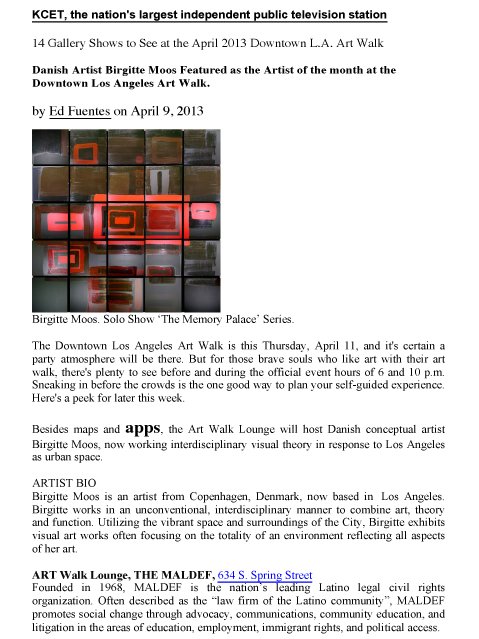 SET DESIGN for The Arsonists. American premiere at the Odyssey Theatre in Los Angeles.  April 3 - May 23, 2010

”... the look and feel of a grim East-European film of the 60s, with just the right touch of Keystone Kops madness...”

”The two level set design from the wallpaper to the hanging houses was beautifully developed by Danish set designer and fine artist Birgitte Moos. (I could not expect less from a student of Achim Freyer.)...”

“Scenic designer Birgitte Moos has layered that second level attic atop a sterile white living room that looks like it might be a generic hotel room.

Miniature houses representing the city float in space, and the firefighters scale metal towers to peek in the windows…”

”The set, by Birgitte Moos... was marvelously evocative...” 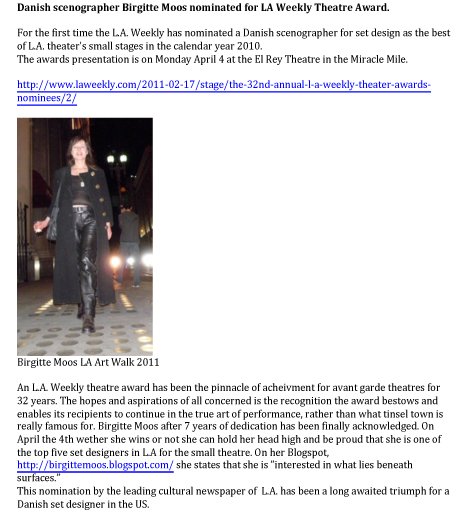 "In a Watermill Center fall residency taking place October 15 through October 28, the Danish artist Birgitte Moos is undertaking a study of theatrical set design that will ultimately become a book about the effects of abstract imagery on her art form.

From challenging gravity to creating a language through non-realistic imagery, Revolutionary Spaces will explore the interaction of the audience and the stage. Moos questions how and where the viewer experiences recognition and intuitive understanding of the content of a performance as it relates to the environment of the action on the stage..'

Revolutionary Spaces is an exploration of the art of theatrical set design. From challenging gravity to creating a language through non-realistic imagery, Revolutionary Spaces explores the interaction of the audience and the stage. This project questions how and where the viewer experiences recognition and intuitive understanding of the content of a performance as it relates to the environment of the action on the stage. The intent is to channel this exploration into writing a book on the effects of abstract imagery as they apply to set design.

Birgitte Moos is a Danish artist, based in Copenhagen and Los Angeles. Both a conceptual painter and set designer, she holds an MFA from the National Design School of Denmark, where she was often called “the most analytical Danish set designer.” Her work has been shown in various venues and exhibited internationally at numerous galleries. Recently, she designed the set and costumes for Theatre Cantabile2 in Copenhagen and had a solo exhibition at Edgar Varela Fine Arts in Los Angeles.  Los

More information is available at www.birgittemoos.com.

This free workshop : A work-in-progress presentation, is part of the  Watermill Center's Fall 2009 Artists-in-Residence program.

THE TALK WAS AN INTRODUCTION TO THE BOOK I'M WRITING ABOUT INTER-DISCIPLINARY SET DESIGN AND A DESCRIPTION OF WHAT THE RESEARCH WAS ABOUT AT THE WATERMILL CENTER, WHILE I WAS THE ARTIST IN RESIDENCE THERE.

Set design is an art form that actually can draw on several other artistic disciplines and integrate some of them in itself and its expression. Set design is a wildly interesting topic which really is visual communication, that can comment on cultural events and generate debates in society. Set design, when it is interesting, has moved far away from visual social realism in theatre and backdrop painting, to abstract space structures. Which simultaneously can convey messages that support the other elements on stage, if there is such thing as a stage!

I chose to study set design because the profession itself draws both from art, literature, psychology, philosophy, communication, and anthropology. Each field that I was enormously interested in, and therefore not able to decide which area to focus on.

Birgitte Moos is a native Dane but she splits her time between Copenhagen and Los Angeles and so her works reflect urban landscapes that transcend continental divides.

Her imagery has evolved from the use of early European  mythological symbols and figures into dark, abstract, almost architectonic works that suggest urban landscapes that trap and channel human figures through an uneasy labyrinth.

Moos describes her approach to painting as an exploration of her personal experience and that of her generation by adapting methods from the memory palace technoique of recall, "the method of loci, or 'ars memoriae' (art of memory)." The woven layers in each individual painting are  narratives representing separate visions of remembrance. "Symbolically," Moos explains, a brain scattered full of information: A perverse peep into the creative and complex atmosphere inside the memory of a mind palace."

The images she produces are often reminiscent of the darker panels of graphic novels in which the inhabitants are trapped in a twilight metropolis, divided by walls of their own making. making. 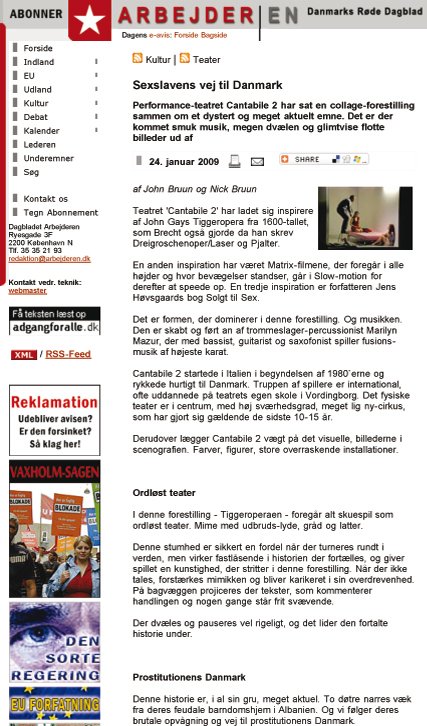 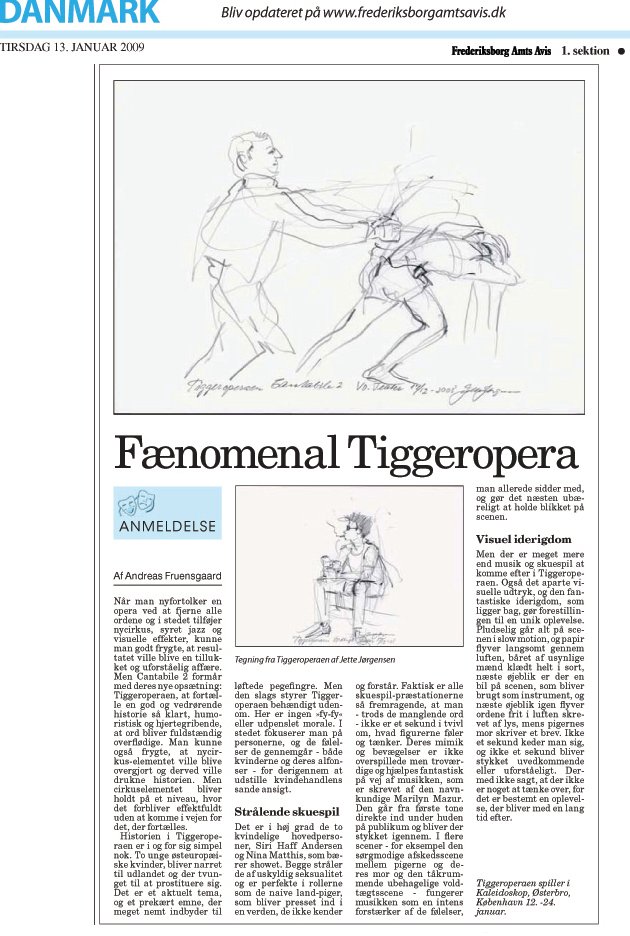 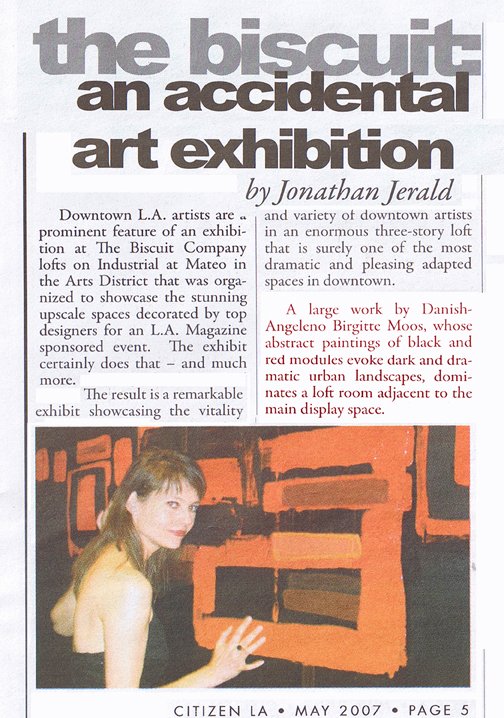 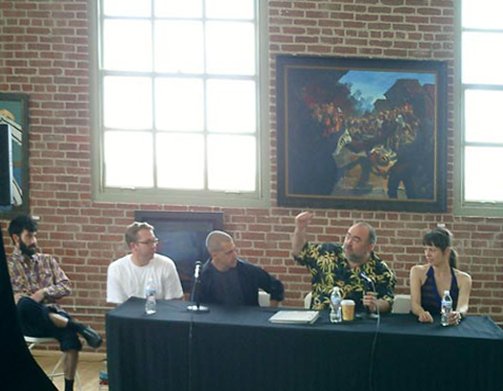 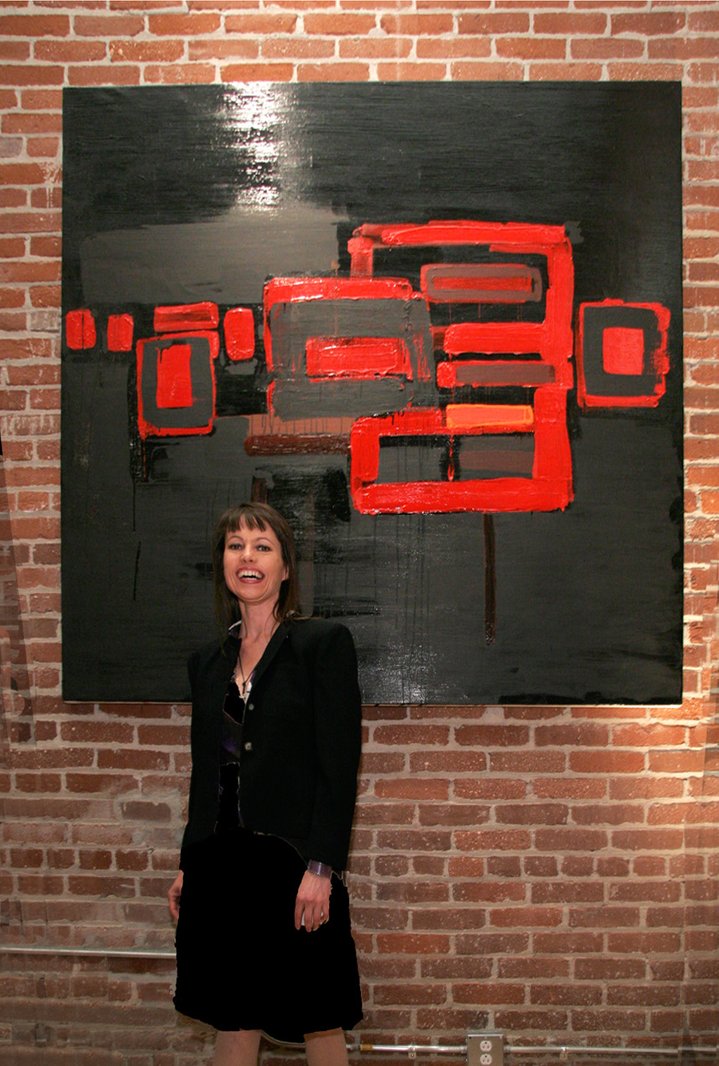 BACKSTAGE, Nov. 8, 2005. FROZEN at the Ark Theatre by Dany Margolies